Congress requires that all members of the electronic media covering news events on Capitol Hill be accredited by the Radio-Television Correspondents Galleries.

The Radio-TV Correspondents Galleries were created by the Congress to act on its behalf to facilitate electronic members of the electronic media covering news events on Capitol Hill.

Rules of Congress prohibit Gallery members from engaging in lobbying, advertising, publicity or promotion work for any individual, corporation, organization or government.

News coverage is regulated by the following rules. Please refer to the appropriate section of this manual for the full statement of each rule.

You may not shoot live or recorded video images in the following areas:

Videotaping and audio recording are permitted in the public areas of the House and Senate office buildings.

Gallery members must follow the directions of the Gallery staffs at all times.

Only current Members of Congress and the Vice President may be interviewed or make statements in the House and Senate Gallery studios or in other parts of the Galleries.  (House committee witnesses may be interviewed in the House Gallery and Rayburn Studio on the day they are scheduled to testify.)  The restriction does not apply to interviews given by credentialed members of the Congressional News Galleries.

Members of Congress (except the Speaker of the House, the House Majority and Minority Leaders, the Vice President, and Senate Majority and Minority Leaders) must be invited to appear in the House and Senate Gallery studios.  Appearances on the House side must be at the invitation of a member of the Radio-Television Galleries.  Appearances on the Senate side may be at the invitation of any member of any Congressional News Gallery.  Members of the Galleries who issue invitations for news conferences must be present in the Galleries during interviews.

News conferences with Senators and Representatives in their respective Galleries take precedence over other uses of the studios.

Interviews given by credentialed members of the Congressional News Galleries are permitted in the House and Senate studios and the Rayburn studio with prior clearance with Gallery staff.

Gallery members may not list Gallery addresses or the main phone numbers of the Galleries on their business cards or stationery.   Booth occupants must also have an office outside the Capitol.

House and Senate rules require appropriate and professional attire for access to the Speakers Lobby and the Senate Chamber.  (For example, men are required to wear jacket and tie, and women may wear suits, skirts and slacks)

Congressional Radio-TV Gallery credentials may be used only when covering news stories.  They may not be used to gain access to Capitol grounds or buildings when working for non-news clients or for other purposes unrelated to news coverage.

Rules of Congress prohibit Gallery members from engaging in lobbying, advertising, publicity, or promotion work for any individual, corporation, organization or government.

Interviews with non-members and officials are permitted at authorized stakeout areas except for at the Senate policy luncheon stakeout – non members of Congress must be escorted by a Congressional member to the microphone.

Equipment must not be left unattended.

The Capitol Grounds - use of portable equipment is not restricted except when it impedes the flow of vehicular or pedestrian traffic, or creates a safety concern, or in heightened security situations when press may be restricted to certain areas.

East Front - portable coverage for interviews is allowed at the base of the House, Senate and Center steps.  Approval of the Member is required.  News organizations must notify the House Gallery and Senate Gallery of coverage plans.

West Front - portable coverage is allowed at the base of the steps and in the grassy areas.  News organizations must notify the Galleries of coverage plans

Arrival Shots - portable arrival shots are allowed.  There are two pre-designated locations on the East Front near both Carriage Entrances which require approval of the appropriate Sergeant At Arms and the Galleries (see stakeout and photo op rules).

Portable Interviews - in the House and Senate office building corridors.  Approval of specific Member’s office is required.  Equipment is not restricted as long as it does not impede the flow of pedestrian traffic.

In the House and Senate Gallery Studios - Reserved for exclusive use through the Gallery staffs.

Designated free press areas on Capitol grounds (see map inside back cover) - Gallery members may set up tripods in these locations for standups or interviews without prior approval.

Areas of the Capitol grounds other than free press areas - For use of tripods, a Capitol Police tripod permit is required.  Contact the appropriate Gallery for assistance.

In the Capitol Rotunda - Approval of Congressional officials through both the House and Senate Galleries required.

In Statuary Hall - Approval of the Speaker’s Office through the House Gallery is required.

In the Old Supreme Court Chamber and the Old Senate Chamber - Approval of the Senate Curator through the Senate Gallery is required.

In the Rayburn Room - Approval of the Speaker's Office through the House Gallery is required.

In open Congressional Committee Hearings - Approval of the Committee through the appropriate Gallery is required.

In Capitol Building Corridors - Approval of Congressional officials through the appropriate Gallery is required.

In the Capitol subways - Restrictions vary according to location.  Approval of Congressional Officials through the appropriate Gallery is required.

Radio coverage is allowed throughout the Capitol complex and the Capitol Visitor Center subject to the following rules:

On the second floor of the Senate wing - Extending from the President’s Room, around the corner through the Ohio Clock Corridor, past the East Grand Staircase, including the bank of elevators and the Senate Reception Room.

On the second floor of the House wing - All hallways surrounding the House Chamber.

In the Speaker’s Lobby - At either end of the lobby around the reporters’ tables.

In the Rayburn Room - Only when the House is not in session.

In the Old Supreme Court - Approval is through the Senate Curator. Contact the Senate Radio-TV Gallery to request approval.

In the Old Senate Chamber - Approval is through the Senate Curator. Contact the Senate Radio-TV Gallery to request approval.

In Members offices - Approval from Member’s press office is required.

On Capitol grounds - Interviews must not interfere with pedestrian or vehicular traffic.

You must notify the appropriate Gallery of your intentions to cover a hearing so that the Gallery staff may make the necessary arrangements.

Each committee has its own coverage rules.  In general, tripods and microphones may not be broken down or removed during a hearing except during a break or recess in the hearing.  Cameras may be removed from tripods for cutaways in some hearing rooms.

Broadcast technicians must maintain decorum at all times and  conduct themselves in a way that does not interfere with the hearing.

Unattended tripods may not be used to reserve camera positions inside a committee hearing room.

Many Congressional committees prohibit food and drink in their hearing rooms.

Rules for cutaway crews during hearings vary, depending on the committee.  In crowded hearings, crews may be required to rotate into the room to shoot cutaways.

Videotaping or filming with a tripod in any other area requires a tripod permit.  Approval through the appropriate Gallery is needed.  Tripods are to be set up only on grassy areas (except at the location near the fountain). 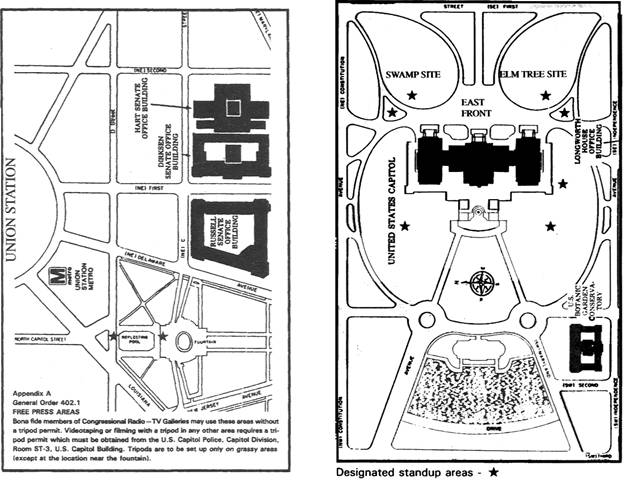 All members of the Radio and Television Correspondents’ Galleries are expected to conduct themselves in a professional manner when working in the House and Senate Gallery workspaces and studios.

SECTION (VII)
Use of House Studio by Congressional Staff

Congressional staff may not occupy space on the media camera riser. If a floor position becomes
available at the base of the platform, Gallery staff will oversee placement of one staff video camera, provided their Member is the lead participant (or designee) in the event.

Members of the press who cover Congress play a unique role in our democratic system of government. The First Amendment rights of the media allow them to report on the workings of Congress.  The image and perception of the USCP is continuously developed through mass media coverage and our first-hand interactions with members of the media and the public during routine and high profile events.

In the course of carrying out the responsibilities of the USCP, employees of the Department and members of the press frequently interact.  The Department cooperates fully and impartially, in a transparent manner with the media, to disseminate factual information.  It is our responsibility to fully understand their First Amendment rights and facilitate their ability to obtain information considered to be in the public domain in a manner consistent with the procedures established by the Department.

The Public Information Officer (PIO) serves as the designated point of coordination for the dissemination of information and ensures proper continuity, liaison, and cooperation between the Department and the media.  The PIO may be requested through Communications.  The following guidelines should routinely be applied in a courteous manner by all employees of the Department when interacting with the media:

Designated free press areas on U.S. Capitol Grounds can be found on the accompanying map and are listed below:

Any questions or concerns about these procedures should be directed to the USCP Public Information Office at (202) 224-1677 or via email at pio@uscp.gov.